I was watching with a friend to recorded programs, including one in which French products were advertised. The French PR is fantastic in this area. The Netherlands (from abroad often erroneously called Holland, which are only two provinces in our country, namely North and South Holland) can learn a lot of this. We Dutch are famous for Dutch Design, our fruits and vegetables, our cheeses, our art through the centuries, our inventions, etc. Made in Holland. Unfortunately, we often let another run off with our pride. Our sayings: “act normal, you do crazy enough”, “Own fame stinks” and “What you get from far is yummy” also do not help to turn us back on stage and enjoy the limelight. That’s why I came up with the idea to pay attention on my blog to Dutch culture and products. I want to offer them the platform they deserve.

This as an introduction to “Made in Holland” in the Netherlands, by Rineke de Jong.

.south western province Zeeland. Some years ago I made a painting “Zeeland Girl,” in South Beveland costume, (acrylic and pencil on Strathmore 300 grams paper, 102×64 cm), made following the discussion in this country about the Islamic head tissues. I wanted to give my input and thus also show that our head coverings surely are very beautiful and unique. The costume and the head covering show you if the lady in question is still a free girl or that she is married, whether they are Catholic or Protestant, whether she is or is not in mourning and how rich she is. This clothing is unfortunately not much worn now a days, but for me it is not only part of our tradition and history, it’s real art. Quite different than a headscarf. 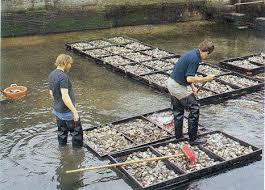 The costume takes me to the good life. Take for example the Zeeland oysters. A world-renowned delicacy. They are eaten raw, straight from the shell. They say it is also a Aphrodisiac! No doubt since it is so high in protein. Personally, I prefer steamed oysters with black bean sauce and chopped spring onions on top, like icing on the cake.

Here’s my favorite recipe (two oysters per person (more is allowed of course), as an appetizer, or just as good appetite in between):

A pan of boiling water, place there above a steamer with the oysters next to each other, covered with a lid or a colander, even with a lid. Let the oysters steam for a couple of minutes minutes until the shell opens. Remove the top shell, let rest in the other shell. Place the oysters on a plate, add black bean sauce (available in Chinese shops or supermarket) and garnish with chopped spring onion. Eat the straight from the shell. Lovely. Buon appetito !!

Here is also a video of restaurant Nam Kee in Amsterdam. Personally, I ate them at restaurant Ah Sang on the Overtoom in Amsterdam. Unfortunately Sang retired and the restaurant, after 40 years, is no more. Too bad, because you could eat fabulous food there.